Peloton or the gym? More people are choosing both. What that means for the fitness industry 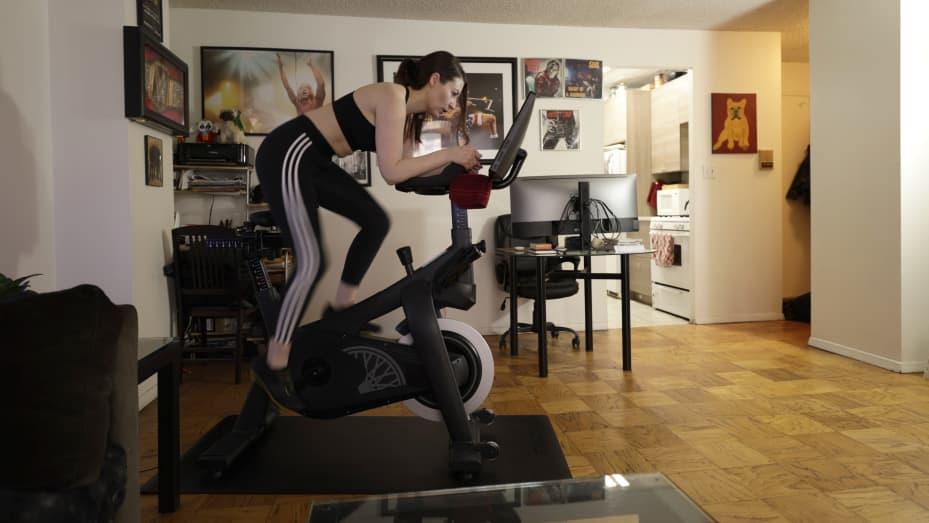 Megan Thompson works out on her exercise bike at home in New York City.

Julia Yuryev still hasn’t caved and purchased a Peloton Bike, but the 38-year-old public relations professional is actively considering it.

Yuryev said she enjoys taking group classes at her local fitness studio. But since it has reopened, she doesn’t feel like the selection is enough. She said she may consider splurging on an at-home gym for her Los Angeles apartment, as many of her friends have already done.

“At-home fitness is still a consideration for me,” Yuryev said. “The yoga studio [near me] is only offering certain classes with such limited capacity. They’re scaled back … so not all the variety is there now because of the rules and the labor shortages.”

Those in Yuryev’s situation are increasingly opting for a hybrid approach. That could come as a surprise for some investors who bet that consumer fitness options were an either-or choice. Either consumers would break a sweat at home, as they had during the pandemic, or they would revisit the gym once they received their Covid-19 vaccinations.

Visits to gyms on the rebound

While demand for home fitness equipment has slowed from 2020′s frantic pace, it is still growing. Sales in the United States surged 85% from 2019 levels to reach $3.7 billion last year, according to the NPD Group. Fitness equipment sales were up 20% year over year through August, and up 108% on a two-year basis, the market research firm said.

NPD Group was unable to offer a forecast for the category, but analyst Matt Powell said he expects the market to remain strong as people seek out activities to stay in shape. He noted that sales typically ramp up again in January.

Foot traffic to fitness centers, meanwhile, is on the mend. Visits were only down about 8% in early October compared to the same period in 2019, according to Jefferies. Membership at gym chains LA Fitness and The Edge Fitness Clubs bounced back the fastest from pandemic lows, Jefferies said, followed by Crunch Fitness and 24 Hour Fitness. Mark Wahlberg-backed F45 Training is the biggest laggard, it said. 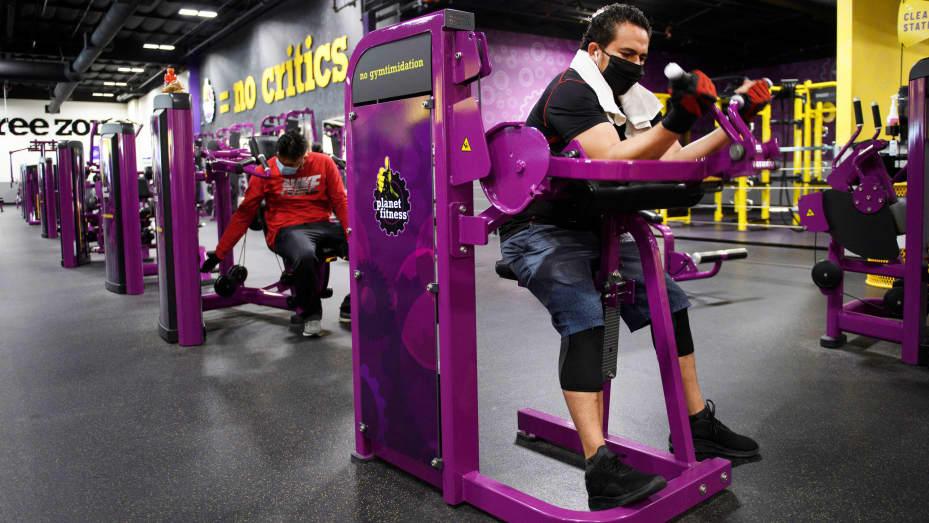 A customer wears a face mask as they lift weights while working out inside a Planet Fitness gym as the location reopens after being closed due to the Covid-19 pandemic, on March 16, 2021 in Inglewood, California.

“We’re definitely seeing clear data that show people are getting comfortable again to return to the gym,” Jefferies retail and fitness analyst Randy Konik said in an interview. “What’s likely going to happen is demand for gyms will accelerate pretty dramatically. … But demand for [at-home] fitness equipment is likely to stay somewhat strong.”

Searches for digital fitness platforms, including Peloton and Tonal, peaked in January, as consumers committed to New Year’s resolutions. Then, searches ticked up slightly in August when the delta variant became a widespread threat, Jefferies said. While online searches for at-home workout products like jump ropes and yoga mats reached an all-time high in April 2020, those queries have dwindled ever since.

Still, Konik expects many U.S. households — if afforded the option — are going to choose a hybrid approach to working out.

“People are going to realize they can work out at a gym three days a week, and then three or four days a week just do something at the house or in the basement,” he said. “It’s all about convenience.”

This mindset is reflected in fitness companies’ recent offerings. Peloton has a growing corporate wellness program. Mindbody, a booking platform for the health and wellness industry, is also hoping to cater to businesses as they bring workers back to office buildings.

Life Time Fitness, a high-end gym chain that went public earlier this month, redesigned its mobile app and launched a digital-only subscription during the pandemic. That’s still an option that it’s marketing to customers today.

Mark Mullett, co-founder and co-CEO of Obe Fitness, said the rapidly evolving landscape has allowed for people to choose from what he calls a “fitness buffet.” Obe is an at-home fitness app that offers livestreamed and on-demand workout classes to members who pay $27 each month.

“We love the fitness buffet: You’re working out at home three days a week, going to your local studio one day, and the next day you are going for a run with friends,” Mullett said. “Our job is to make sure that we’re delivering people all of the content, all of the community and all of the results they need.”

Obe recently launched spin classes for its members who already have bikes at home or use them at the gym. The company has also been working with Gap’s Athleta brand, which is an investor in Obe, to host in-person workout events.

Competition at home heats up

Amid the increased demand, a flurry of new entrants is making for a more crowded space and pressuring companies to spend more to woo users.

Peloton announced in August plans to increase advertising, as it pitched its lower Bike price and redesigned Tread. Its sales and marketing spending accounted for 24.5% of revenue in the three-month period ended June 30, up from 14% a year earlier.

Hydrow, a connected rowing maker that counts Lizzo and Justin Timberlake as investors, debuted a marketing campaign in October called “Hydrow High.” It will appear in print and digital ads as well as on broadcast television through the holiday season. The company declined to comment on how much it will spend on the project, but it said it is its most far-reaching effort to date. 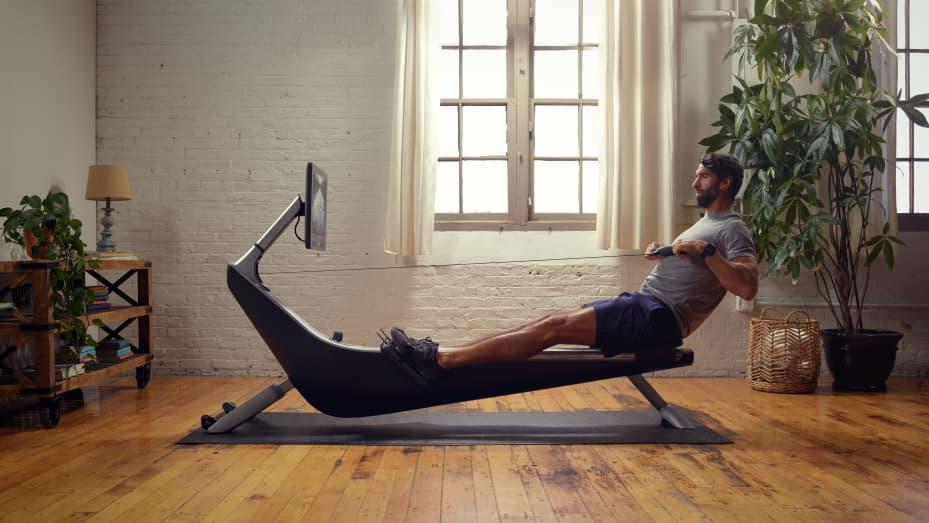 Hydrow, the maker of a $2,295 rowing machine, said it has secured nearly $200 million in financing.

“One of the goals of this campaign is to demystify rowing and make it more accessible and appealing to a wider audience,” Hydrow chief commercial officer Gretchen Saegh-Fleming said. “This idea of the Hydrow high is that people feel so much better and stronger after working out.”

One of Hydrow’s rowing machines retails for $2,295, compared with Peloton’s original Bike’s price of $1,495 and Tonal’s weight-lifting machine at $2,995. Lululemon’s Mirror device retails for $1,495, while Liteboxer, and at-home boxing device, costs $1,695. That’s just a few. You can also pay $2,799 to upgrade your home gym with CLMBR, a vertical climbing wall. Frame Fitness, a connected reformer machine for Pilates, is on presale for $2,999. There are many more.

On top of the equipment cost, users pay a monthly fee to access content. A Peloton membership, for example, is $39 a month. Tonal’s membership is $49 monthly.

“The explosion of at-home fitness directly parallels to the explosion of e-commerce over the last decade plus,” BMO Capital Markets analyst Simeon Siegel said.

“The door has been opened for dollars to be thrown at various connected exercise equipment makers because the consumer has given them a mission,” he said. “Just like the amount of start-ups that erupted across e-commerce when consumers gave retailers permission to enter their living room.”

The companies that will be most successful will be those that keep churn rates as low as possible — meaning people stick around month after month, Siegel said.

“Ultimately, engagement is critical,” Siegel said. “So what gets someone to not cancel? That’s the biggest question out there.”

Tonal and Hydrow are reportedly exploring public offerings, which would give investors greater insights into user trends. The companies declined to comment on their plans.

Peloton is, meantime, making the bet that its branded T-shirts, hoodies and sweatsuits can serve as walking billboards — even as some of its users return to gyms.

In September, it dropped its biggest selection yet, in tandem with a massive marketing push around the company’s clothing arm. Ads for Peloton apparel have been pasted across billboards, digital subway slots and even empty storefronts across New York City. 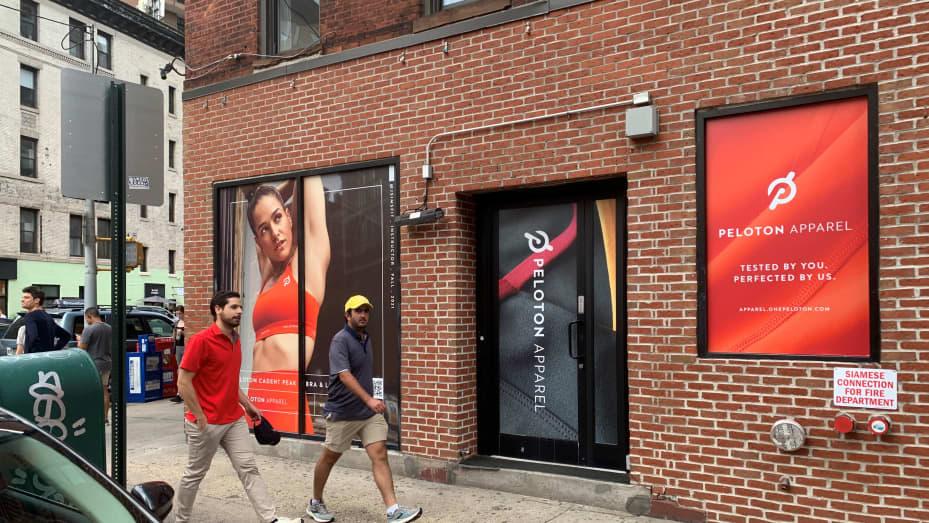 People walk by a storefront in New York City’s SoHo neighborhood, where Peloton is advertising its apparel line.

“When you see someone wearing Peloton you realize you’re part of that community together, and there’s something sweet about it,” said Jill Foley, vice president of apparel at Peloton, in an interview. “It’s really powerful.”

Entrepreneurs in this space say community building is key — whether that’s at the gym or at home. Khalil Zahar, founder and CEO of the at-home boxing business FightCamp, said companies that make users feel as if they belong to a group of like-minded people are going to be the ones that stand the test in the coming months.

“Now that we are back in the gym, many of the concepts that worked for connected fitness during the pandemic may no longer be viable in a post-pandemic world,” Zahar said.

“However, there’s a silver lining for consumers as it will undoubtedly force companies to make their products better, and the companies who survive these next few years of transition will come out much stronger,” he added. According to Zahar, the best products are those that keep new content coming and have engaging instructors.

Back in Los Angeles, Yuryev said she’s still working through justifying the expense of buying an at-home fitness machine, like Peloton, in addition to taking group classes. Her friends are also motivating her to make a decision, she said.

“Flexibility, especially with all of the remote work, is important,” she said. “And I really need that feeling of community.”

Potential results of your chosen option (Market Share and Profits)

Looking for help with your homework?
Grab a 30% Discount and Get your paper done!